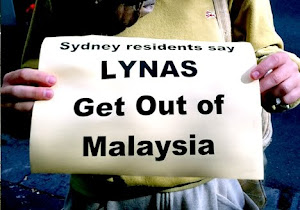 Firstly our Minister of Science, Technology and Innovation Datuk Dr Maximus Ongkili was reported on 28th February that waste water from the rare earth plant in the USA has been allowed to discharge directly into the drain.  Molycorp rare earth plant, the only operational plant in the USA was in fact closed down over ten YEARS ago for ground water pollution.  The newly revamped plant has mechanism in place to manage and contain all waste water in-house.  No waste water from the plant will be discharged into any waterways unlike the poorly designed Lynas plant in Gebeng which dump its contaminated water into the Balok River and the South China Sea.

Today, Dato’ Seri Liow Tiong Lai, Minister of Health reportedly suggested the Lynas’ radioactive waste be shipped back to Australia. Obviously he had not checked with the Australian Government.

The Western Australian Government through the Minister for Mines and PetroleumNorman Moore has stated twice – once in answering to questions raised by Greens MP Robin Chapple in April last year, and when asked by journalist last week – that his Government would NOT accept any radioactive waste from another country including that generated by Lynas.

“It is appalling that our Ministers are making such blatant unsubstantiated statements. They are misleading and confusing the public instead of assuming their duty of care to manage the Lynas problem with prudence.” said Mr Tan Bun Teet, Chairman of SMSL

Minister Liow’s suggestion has essentially contravened Malaysia’s commitment under the Basel Convention on the Control of Transboundary Movements of Hazardous Wastes and Their Disposal.  It is illegal under international law to transport hazardous waste like that from the Lynas plant across national boundaries.

“It is an embarrassment in the eye of the international media and governments because through the Lynas issue, Malaysia is now being watched and reported regularly around the world!  Malaysia’s governance standard has just been washed down the drain by our very own Ministers.” Added Mr Tan.

SMSL is disappointed and alarmed at the same time by the unprofessional manner in which our Ministers and senior bureaucrats have demonstrated in their inability to tackle the Lynas waste problems to date.

Raja Dato’ Abdul Aziz Raja Adnan, the Director General of AELB  has more than once said that the waste produced by LAMP is so safe that you can ‘tabur’ (scatter) it around.

The Menteri Besar (Chief Minister) of Pahang has claimed that the radioactivity of the waste is no more than that posed by smoking a cigarette or the use of our hand phones, quoting directly from Lynas’ statements.

“AELB is a regulator and the MB is in charge of Pahang’s state affairs. These are supposedly highly responsible positions.  Yet we have people in these positions making such careless and irresponsible statements instead of doing their duty to take care of the country and the state.”  Remarked SMSL Vice Chairman Haji Ismail Abu Bakar.

“It is unfortunate and unacceptable that rakyat and Malaysian tax payers will suffer as a result.  Worse, the state and the country’s future and our economy will also be jeopardised by the bad decision of the current Government.” He added.

Last Sunday’s rally is only a test run for many citizens. The Stop Lynas campaign has gone national in a big way.  The Government’s poor response and irresponsible remarks will only inflamed the situation further.

“We are preparing for the legal action.  We want it strong and tight to withstand the scrutiny of the court, the Government and Lynas’ legal team.”

“Lynas will probably pull its next publicity stunt by bringing in its rare earth concentrate to salvage its falling stock in the share market.  SMSL, Kuantan residents and our fellow Malaysians are ready.  We said we would block the ore getting to the plant, and we will.  Now that we know we will not be alone!” Concluded Mr Tan and Haji Ismail.