Rental income receivable under tenancy agreements is recognized on a straight-line basis over the term of the lease. Meanwhile, gross turnover rental is recognized as income in the accounting period on a receipt basis.

Deferred income relates to the difference between consideration received for tenancy deposits and its fair value using the discounted cash flow method.

The deferred income will be unwind and recognised as income in the income statement over the lease term.

Actual revenue was higher than the preceding year’s corresponding period by 2.6%. This is due to overall improvement in rentals and car park income in 2010. In addition, the application of FRS117 commencing 1 January 2010 also contributed to the higher revenue in 2010.

What are the new accounting policies or treatment noted?

The QR disclosed that the application of FRS 117 commencing 1 Jan 2010 has resulted in additional revenue of RM1,059,693, may due to the effect of difference on rental income receivable under tenancy agreements which is recognised on a straight-line basis over the term of lease, against the gross turnover rental recognised on a receipt basis. 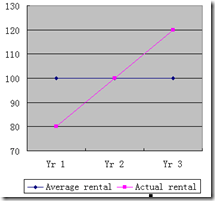 What is this about? It is more likely this is the effect of recognition of rental income which is chargable to tenants on a step-up basis over the lease term or there might be rent free period given at the initial lease term.

In order to promote greater compliance to the approved accounting standards, Hektar REIT may take the opportunity under FRS 117 amendments to recognise the rental straight-line effect this year as revenue and trade receivables.

The reduction in investment properties may have been effected the amount of trade receivables as a separate current asset item.