His arrival, accompanied by wife Datin Seri Rosmah Mansor, was received by staff and officers of the ministry who were involved in preparing the budget.

Najib putting the Budget 2013 report into a briefcase during his last preparation for tomorrow.

Najib, who is also Finance Minister visited the operation’s rooms, and subsequently, held a closed door meeting with senior officers of the ministry.

Najib is scheduled to table the 2013 Budget in parliament at 4pm tomorrow.

In his 1Malaysia blog entry, Najib said the tabling of the 2013 Budget was made from the people and for the people because it was prepared after taking into consideration the views of the people.

It is also expected to make a big impact on the national economy, other than giving a good impact to the people, he added. – Bernama 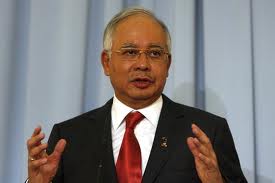